My cat, Thomas, was diabetic when I adopted him in November of 2004. He’s a seven year old Maine Coon Cat. Although I’ve only had him a short time, I had become quite attached to him and loved him as if I’d had him my whole life. 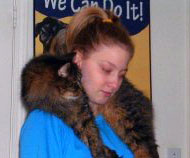 One night in late May, Thomas began to vomit and lay on his side like a rag doll. He looked so skinny and tired; his eyes were squinted up as if he were looking into the sun. I rushed him to the Animal Emergency Clinic since it was Memorial Day Weekend, where I was told that Thomas’ diabetes had become severely out of control. Thomas was drastically dehydrated- he had lost several pounds, mostly water weight. The Emergency Clinic kept Thomas for two nights, and then on Tuesday morning, I picked him up and took him straight over to Companion Animal Hospital.

Dr. Rob saw Thomas and began working to regulate his diabetes and to rehydrate him by giving him IV fluids. When Thomas was stable enough to go home, Dr. Rob talked with me and told me although Thomas was stablizing, the outlook was a bit grim since Thomas’ diabetes was not regulating well. However, despite the signs that Thomas wouldn’t make it, Dr. Rob assured me that he would try as hard as he could to help him to get better so that we would not have to put him down. He helped me to be able to provide Thomas with at-home care to support him through this time, graciously talked with me on the phone anytime I had questions, and kept up hope that it was still possible to save my kitty.

Well, although Thomas is still not entirely out of the woods, his last check-up a month after his diabetic “crash” showed that Thomas’ diabetes is being more accurately managed and that Thomas is now better hydrated– he has gained back all of his lost weight!

Thank you to everyone at Companion Animal Hospital for helping to get Thomas back to his old self- I’m so grateful to have my kitty healthy and happy again!

Tasslehoff and Happy CatWe got Tas as a kitten from a family member when we were still college students. He was our first pet together, but was my husband’s cat from the first day. No matter how nice I was to this little kitten, he always preferred Patrick over me. Over the years, Tas has just become a part of the household. We’ve gotten another cat, Happy, and had two children – Daniel & Elizabeth- (plus I still have a dog named Bear whom I’ve had since college). Through all of life’s changes, Tas has been a loving pet. He loves to fight with Patrick, but is very gentle and tolerant of the children. Actually, he always had a sweetness towards the kids when they were babies. He would lay on the floor beside their crib, and come find me when they started crying. Even though, he’s been such a great pet, I guess we had come to take him for granted. So, when I realized he was in distress, I panicked and called my husband to come downstairs and take a look. Tas was lying on the floor, unable to move his hind quarters. He didn’t seem to be in any pain, but we knew it must be serious. It was after hours, so we called the Animal Emergency Hospital – they told us it did sound serious and to bring him on in. 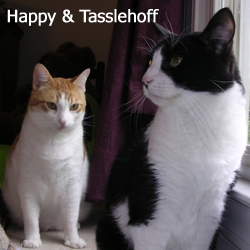 After examining him, they informed us he had a Saddle Thrombus. They said few cats survive and recommended putting him down. The only unusual thing was that most cats with this condition are in extreme pain, but Tas was obviously not in any pain. We decided since he wasn’t in pain to wait until the morning and take him to Companion for an evaluation. Dr. Denise Weaver confirmed the diagnosis and confirmed the likely outcome. However, she saw the difficulty of this situation for me and said she would do some research to see if there were other options. After checking around, she presented a treatment to me that required injections three times per day. Since Saddle Thrombus is caused by a blot clot (or multiple clots), the injections would thin out his blood and, hopefully, make it easier for the clot to break up. We also had to massage his hind quarters daily to keep the muscles working and help the blood flow so his legs would not atrophy if the treatment was successful.

It took over three months before Tas was able to walk again and a couple more months before he regained the weight he lost. But it’s been almost a year and you can’t even tell anything was ever wrong. He will have to take baby aspirin once a week for the rest of his life to help keep his blood thin and reduce the chance of a clot. Plus, his life expectancy is reduced since this could happen again and next time might be worse. But, overall his prognosis is good, and his quality of life is not diminished.

We are very appreciative of Dr. Weaver for “thinking outside the box” and giving us an option to help our furry family member!

WE HAVE SOME GREAT SUCCESS STORIES! LEARN MORE